Catch up with Stephen’s Rallying Adventures! 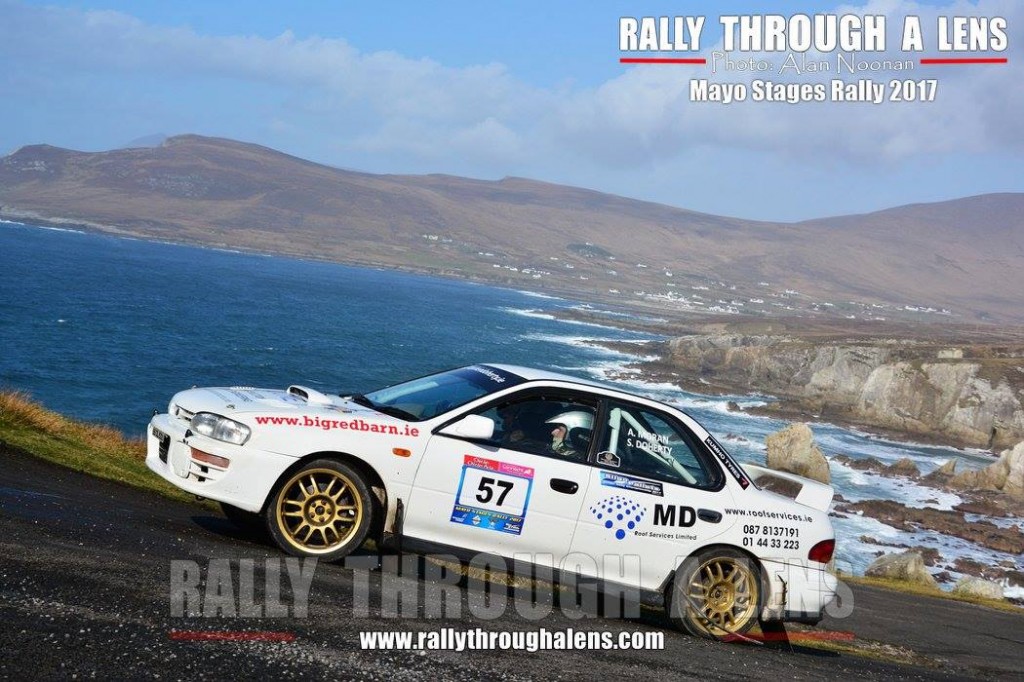 Stephen is back rallying and has upgraded to a Subaru Impreza with thanks to his ongoing sponsors : MD Roof Services, Big Red Barn & Noone Civil Engineering.

After an intense 2 week turn around of Panel Beating since the clare event, the car was in pristine condition for the 2nd round of the Mayo Autocross on June 9th, on the first run Stephen set a 4.55, and on the second run got it down to a 4.44, new tyres were fitted and the car was ready for a good lash at the final run. Team mate Alan Moran went out first with the car… but didnt come in… leaving the Opel Kadett on its roof for the second time in a month… So no 3rd run for either driver, leaving both well down the order in terms of the young driver Championship battle. Stephens planned contention of the Sligo stages in july has now been shelved, next event , Mayo Autocross Round 3 in July.

Stephens first trip out of Connaught to the Clare Autocross on May 26th was to be an unfortunate one, unfamiliar territory can be dangerous, and on his second run of the day cut into a left hand corner slightly too early and ended up with the car on its roof…..

2013 season kicked off in Mayo in May with the car now upgraded to a 1.6 engine, a cautious but clean run seen Stephen finish with a respectable time, and 3rd in the young drivers standings after the first round.

September Autocross 2012- The final round of the year, and it was all to play for in terms of the Junior Championship, It was now between Stephen and Alan, so whom ever was fastest on the day would lift the title. On the first run of the day, Stephen was cautious on the slippy track, posting a time of 5.02, whilst Alan came in at 4.58 but with damage to the car, which unfortunetley couldn’t be fixed. The car was undriveable for the rest of the day  so that brought things to a pre mature end leaving Moran to retain the Junior Championship and Stephen to retain 2nd place again this year.

July Autocross – Pushing over the limit is never a good idea… or the fastest way around the track! Rival Alan Moran was on form and took maximum points pushing Stephen back to second, leaving it all to play for in the final round in Sept.

June Autocross- After a mixed day of fortunes , and adapting to some new upgrades on the car, Stephen had two slow first runs but got it together on the final run and eventually took maximum points in the young drivers championship finishing one second ahead of rival Alan Moran, and finished 2nd in Class 1. Stephen and Alan are now joint leaders of the Young drivers championship with 2 rounds remaining.

May Autocross – Getting rid of the rust after 6 months of no rallying Stephen had a competitive run in the rain finishing runner up in the junior section and 3rd in Class 1.

After a close fought Season in 2011 with fellow Foxford driver and Team Mate Alan Moran Stephen finished the year as runner up to Alan in the Mayo and District Motorsport Young drivers loose surface Championship, The MD Opel Kadett will be back in action again this year, Stephen is Committed to all rounds of the Championship this year in hope of going one place better than last year!

You can follow any responses to this entry through the RSS 2.0 feed.